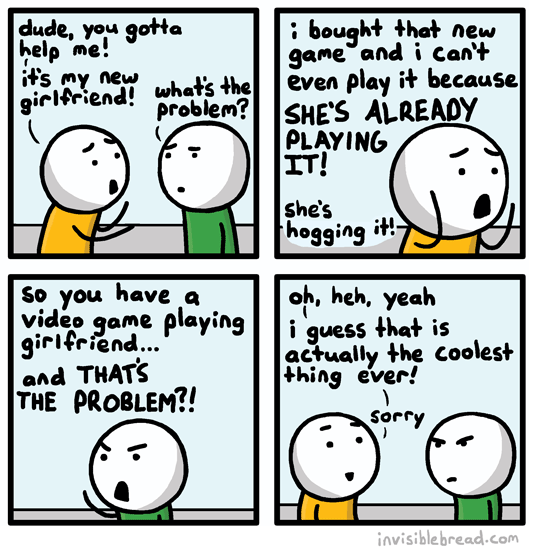 ↓↓Read some more Invisible Breads kinda like this one!↓↓

New Girlfriend
23 Comments
yellow: dude, you gotta help me! it's my new girlfriend! green: what's the problem? yellow: i bought that new game and i can't even play it because SHE'S ALREADY PLAYING IT! she's hogging it! green: so you have a video game playing girlfriend... and THAT'S THE PROBLEM?! yellow: oh, heh, yeah. i guess that is actually the coolest thing ever! sorry

Oh whoa, I unintentionally did a couple comics in a row about relationships and stuff!

In other news, I’ve been working with the screen printer for the shirt to get the layout of those three little words just right.  They can’t be too big or too small.  They have to appear in the correct order and be in black and also right in the middle of the FRONT of the shirt.  Also, they need to be printed onto a shirt and not onto a plastic Target bag.  It’s complicated stuff.  I’ll let you know when I’ll be shipping them out!

Edit:  I have spoken to the person this comic was inspired by and they have allowed me to reveal their identity.  It’s my girlfriend Cara!  When she isn’t melting due to her lack of coffee, she definitely plays herself some video games.  Next up on her list is God of War 3, which is also kinda next up on my list as well.  Oh no, soon this comic might come true!

Oh yeah, and she’s not a new girlfriend either =)  Almost forgot that part.