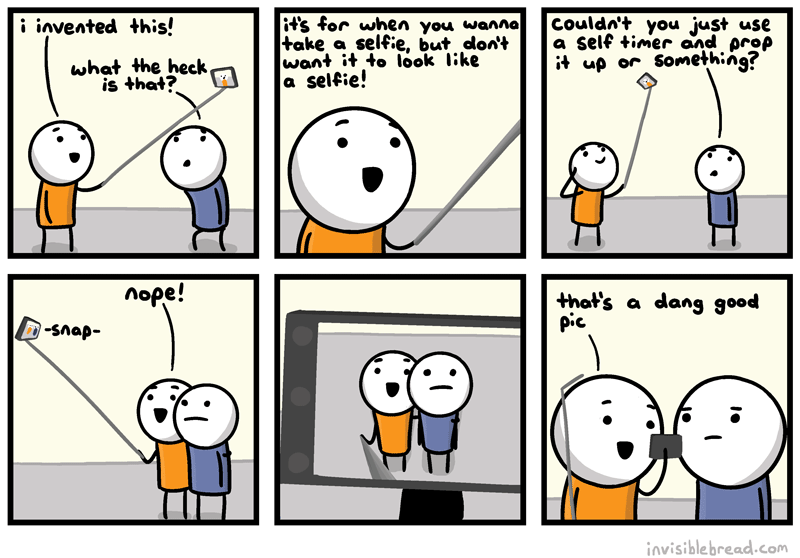 ↓↓Read some more Invisible Breads kinda like this one!↓↓

Selfie
26 Comments
orange (holding phone on a long stick): i invented this! blue: what the heck is that? orange: it's for when you wanna take a selfie, but don't want it to look like a selfie! *orange is taking a picture* blue: couldn't you just use a self time and prop it up or something? orange (snapping picture with friend): nope! *looking at picture* orange: that's a dang good pic

The next version of his awesome invention will be designed so that the pole doesn’t appear in the picture as much.  But hey, that’s what prototypes are for!

(UPDATE: This product actually exists!  Well, now I just really wanna see pics of other people using it in public because come on, look how silly that thing is!)

So sometimes, you go to a hard rock music festival and end up talking webcomics and programming and stuff with a metal band’s lead singer… right?  This is a common thing, yes?

Psychostick was playing at the festival and I had to go over and say hi to him because, well, how many people out there make music that I like and ALSO have a pretty sweet webcomic?

So how about you go check out some of Psychostick’s music?  Or check out Rawrb’s webcomic, Alfredo Afro?  Or do both!  Or neither!  Any combination, it’s up to you!