Emerald City Comicon happened at the beginning of this month and it was an absolute blast.  The post that follows will recap the day’s events as best as I can remember=)

At the convention, Booth 2420 consisted of me, Jason Poland (Robbie and Bobby), Ryan Hudson (channelate), Alex Culong and Ray Castro (Buttersafe), Denis Caron (Corvink, L.A.W.L.S.), Andrew Gregoire (I AM ARG!) and Paul Westover (Woody After Hours) and it was awesome.  Totally awesome.

I flew in Thursday night and got into the Seattle airport around 10 pm.  Took the train from the airport to downtown Seattle where I met up with Jason at the hostel we were staying at.  Did you know that I had never met him in real life before that?  Pretty much from this moment to when I flew out on Sunday, everything was very, very surreal in the best way possible.

From there, we met up with Denis, Ryan, Ryan’s wife Vee, Paul, Brian King (InkOUTBREAK) and others.  (I say others because I’m already starting to get hazy on the events of the weekend!)  We hung out for a little bit until the place closed at 12:30 am and from there, we proceeded to wander around in the Seattle drizzle trying to find something to do.  After a little bit of that, we parted ways and headed back to our respective sleep spots.

The day Jason and I had to get all of our stuff from the hostel to the convention center.  Good thing Ryan drove to Seattle and could drive all of our merch there!  Phew!  I had two suitcases and 4 boxes of stuff, so Ryan totally saved me on this one!  So we get there and do our unloading and bring all of our stuff to our booth area.

And then, on my way out of the convention center to get more stuff, I met Alex Culong (Buttersafe)!  There’s this other really fascinating fact about Alex that I’ll tell you about during the Saturday recap =)

I also met Andrew during the morning at some point!  Ah, it’s all a blur!  He was supposed to get in Thursday night, but a missed connection messed up his flight stuffs, so he ended up getting into Seattle around 11 AM on Friday, if I remember correctly.  I couldn’t talk to him much (yet) because I had to set up my table and such.

And then the show begins!  The show hours themselves are a total blur, but I remember talking to a lot of awesome people that stopped by the table.  I may not remember which day I talked to you, but I almost definitely remember your faces =)  Oh boy, that may have been creepy, I can’t tell.

Annnnnd the show is over for Friday!  All of us from the booth go next door to Cyber Dogs and have some tasty vegetarian hot dogs.  Jeff Schuetze (JEFBOT) was there, so I met him!  He’s a great dude as well!  There were many people to meet and it was awesome =)

After our food, we headed out and parted ways with Alex as the rest of us found a place to grab a seat and chat.  And we did indeed chat for a while.  We all talked about lots of things, such as how some Canadians buy milk in bags and other stuff that may or may not be related to comics.

Soon, we all left here too and Jason and I made the short walk back to the hostel only to find out that the entire block was police-taped off!  AH!  So we headed somewhere else to wait out whatever just happened (bystander got shot in the arm during a fight between two men.  WHOA).  After about an hour plus, we finally made it back to the room to have slightly less sleep than we were planning.

This is the day when everyone comes to the convention and it’s super busy!  I made it to the convention before opening and had a Monster in hand (of course).  And guess who arrived the night before and was there to be met.  Ray Castro from Buttersafe!  It’s kinda crazy that it took so long for me to meet the Buttersafers since I’ve always considered them internet colleagues ever since the start of the Left-Handed Toons days.  And now I’ve finally met both of them and saw their faces and touched their hands and everything.  It was great to share a booth space with them.

This day of the show was a blur.  Lot’s of standing, a little bit of sitting and lots of talking.  Luckily, I love to talk to people and have a lot of energy to do so.  I made some things for my booth mates too: 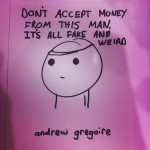 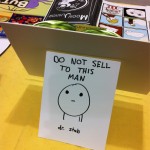 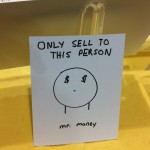 Gotta know the people you’re selling to.  Andrew is Canadian, so that’s the joke I was making with his little doodle =)

Show ends on Saturday and we all…I think we all went straight to a place to eat?  Wait, no, not all of us.  Me, Alex, Jason and Ryan scouted ahead to a place where we could grab a ton of seats for people, since we did have quite a big crowd.  Even though we got there early, we still had to use a booth in addition to our 10-12 person table.  And it was awesome =)  We hung out there for a big and we all had chats.  And this is was when I found out Alex’s secret!  Well, it’s not a secret at all, but he and I HAVE THE SAME BIRTHDAY!  I’m a year older than him, but we have the same birthday!  At this moment, everything started to make sense.  Everything in the world suddenly came together and it all made sense.  And ALSO, apparently Ray had friended me on Steam a while ago and I never noticed it was him until he told me in person.  Whoops!  But now I can hassle him all I want on Steam, so that’s perfect.

After we wrapped up at this location, we headed off to another with our totally huge group of people and somehow ended up getting an entire corner of a bar that had awesome lounge seating.  I chatted with pretty much everyone there since I was free to float around in our exclusive corner.  It was great.

Here’s a little gif I made from two pictures from this even (warning: middle fingers from some people!  I’m the waving guy )

(L.A.W.L.S., channelate, I AM ARG, Invisible Bread, Jefbot and Ink Outbreak all in one pic.  Nice!)

And then the places closes down.  We all leave, but not before having some hugs first.

The final day.  Woke up and headed to the convention center.  No Monster this time since they didn’t have any cold ones next door at Target =(  The con hours fly by once again.  I’m starting to lose my voice at this point, so my voice starts cracking right in the middle of conversations, but it’s all good =)

And now, the con ends.  I sit for a moment because, man, I’m a little tired.  And then, from around the corner, Ryan Pequin (Three Word Phrase) stops by to say hello!  An after-hours, illegal (not really) chat!  We have some chats about things and he’s a super cool dude.

Sadly, my flight was leaving that night, so I was unable to have additional hang times with people that night.  But at least I know that next year, I’ll just fly out Monday so that I can chill it out with additional people.

I pack up my table and slowly start saying goodbye to the people that are leaving.  It was all such a great time that it was really hard to say goodbye to everyone.  I head out of the convention center and meet up with Ryan, Vee and Jason for some pre-flight dinnering.  More chats happen, along with some eats.  Then it’s time to leave.  More hugs and then Jason and I head to the airport to fly out.  More hugs at the airport before Jason and I part ways to travel to different parts of the country.

Now I’m on the plane, totally drained of all my energies and it was one of the most incredible weekends I have ever experienced.  Everyone at the booth was awesome and, if you’ve read this far boothmates, you’re welcome to crash at my place in Ann Arbor any time you like.  You are all great people and I wish we could all hang out more and not just only at cons.